If there is anything cooler than being a rockstar, it´s rockstars performing live inside an ice cave. If you don't agree, check out the new music video from the Icelandic rock band Kaleo. It might just change your definition of being cool.

Kaleo has gained international success in recent years and is known worldwide for songs such as “Way Down We Go” and “I Can't Go on Without You”.

Recently the band released their new single “Backbone.” The rock band from Mosfellsbær also did a fantastic new music video for the song titled “LIVE at Breiðamerkurjökull.”

The entire video is filmed at Breiðamekurjökull glacier. Most of the video is shot inside an ice cave, where the band plays live.

At the beginning of the video viewers can see the incredible Breiðamerkurjökull Glacier from a distance with reindeers running across a field in front of the glacier. As well as shoots of the amazing scenery surrounding the glacier. From the mighty cliffs of the southeast corner of Iceland to icy rivers and lagoons on the glacier edge followed by the black sands of Iceland. 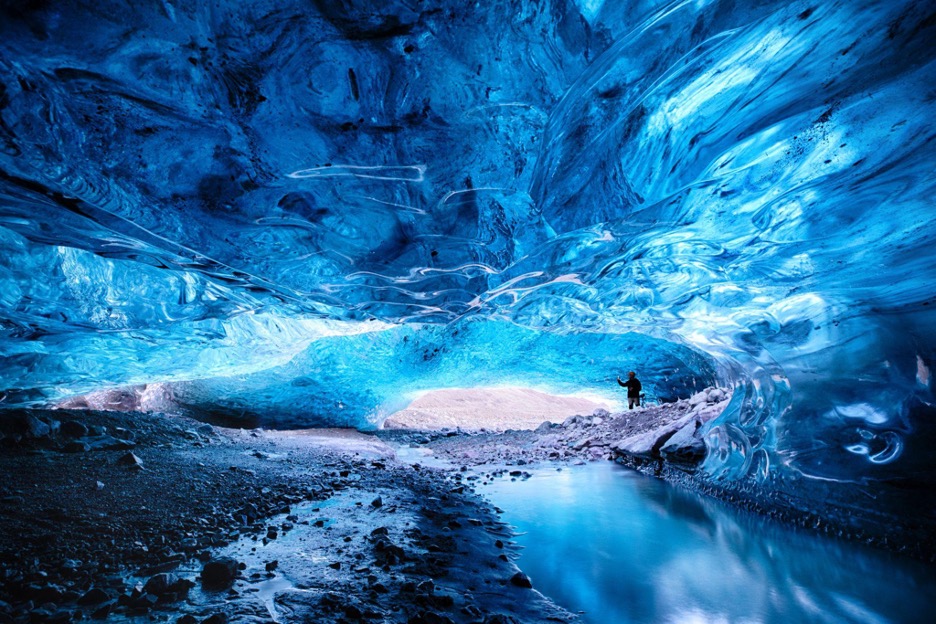 The band members are shown walking across the black sand and ice with their instruments. Ending at a spectacular ice cave, where they perform live inside the cave.

The ice caves are known to be one of nature’s most beautiful structures and this one supports that claim. It is absolutely breath-taking. The cave floor is made of gray round paddles and rocks stacked against the glassy walls. You can see how the multi color ceiling of the tunnel shaped cave is curved beautifully around the band as they play their music. It is truly magical!

Breiðamerkurjökull glacier should definitely be on your travel itinerary when visiting Iceland. The driver to Glacier lagoon is about six hours and once there you have multiple exciting options. For example, boat rides on Glacier lagoon, snowmobile tours on Breiðamerkurjökull Glacier or exploring the amazing ice caves like the one Kaleo played in.

That was not the first time Kaleo filmed a live performance in the Icelandic nature. In the year 2016 the band released the single “Save Yourself.” Following with a music video called “Live at Fjallsárlón.”

That video was filmed at a glacier lagoon called Fjallsárlón lagoon in Vatnajökull National Park. There you can see the band perform live as they stand on one of the icebergs drifting in the lagoon. Like the new video, the surroundings in this one are just stunning. With Vatnajökull Glacier in the back and Öræfajökull, Iceland's largest volcano and highest mountain overlooking the band.

In addition the band's singer, Jökull Júlíusson is dressed in a beautiful traditional wool sweater, called lopapeya. Creating a fantastic combination of Iceland's culture and nature.

Being not as famous as Glacier lagoon, visitors can expect more privacy while visiting Fjallárslón lagoon. Located just off the Ring road, about 10 km from the Diamond Beach, it is easily accessible.

We do not recommend stepping on floating icebergs but if you want to get a more exclusive boat tour on a glacial lagoon, we recommend visiting Fjallsárlón.

Iceland is the land of ice and fire and Kaleo has also used the fires of Iceland in a music video. Performing live last year in front of an active volcanic eruption at Fagradalsfjall Volcanic Eruption.

The video was shot after dark so you can truly see how the lava shoots out of the volcano. Coloring the night in mysterious red and orange gloom. To be honest it looks like the video was taken from within the center of the earth.

The volcanic eruption in Fagradalsfjall is Iceland's last volcanic eruption. It is also the first eruption on the Reykjanes peninsula in historic times. Starting in March 2021 the eruption quickly became a major tourist attraction in Iceland. Being easily accessible and causing little or no threat. Spectators from all over the world visited Iceland to witness the powerful display nature had to offer.

Although the eruption has ended you can still visit the site and witness the awesome power of nature. Getting there is about a half an hour drive from Reykjavik. From a parking lot made during the eruption there is about one hour hike on a marked trail to the crater. On the way you will pass the steaming hot lava field, still fresh from the recent eruption.

See also: Can you visit voclanoes in Iceland?